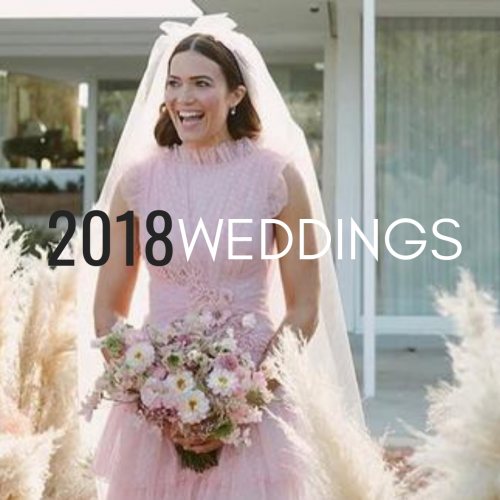 Is it just me who’s recovering from the thought that it is officially 2019? 🙋 I’m just now getting around to realizing just how many people got married in 2018. Seriously, a ton of people got hitched!

Here are a few who said “I DO”

With on-again off-again long-term girlfriend Selena Gomez, I was completely not prepared when the news broke that Justin was engaged to model Hailey Baldwin.

I was even more shocked when I learned they got married shortly after!

Many Moore wedded Taylor Goldsmith. Her dress was pink y’all…pink! The floral was just as pretty! My only question is – did she wrap up her vows with a declaration of “This is Us!” 🤷

I have to say, I had lost hope in these two when they broke off their engagement a few years ago. Since, then though, they have reconnected and they are now husband and wife.

The “Adore” singer, Miguel and model, Nazanin have been dating for years. I was waiting for Miguel to finally pop the question. Now they are officially married!

I was completely not expecting Nick Jonas and Priyanka Chopra to become a “thing.” Seems as if, not only was I proven wrong, but they have also tied the knot in 2018!

I think it’s safe to say the world was watching this love story unfold! This has to be the number one wedding of 2018. The real-life Princess Diaries 😍

Congrats to all the couples who got married in 2018! Here’s to all you Brides-To-Be who are getting married in 2019 — may it be an awesome year for love and marriage! xoxo